Birth and evolution of the Morris S series

In 2001, Morris announced the S series as "the best guitar for the finger picking style" under our consistent policy that "keep being a challenger in a guitar making field".

At that time, we had been conducting extensive market research in the US by attending guitar contests and meeting with some of the top luthiers. We came to the conclusion that we needed to develop a guitar for fingerstyle players. We analyzed various fingerstyle playing styles and also received much valuable advice from top fingerstyle players, in order to develop this special guitar. In order to achieve the highest quality, we also came up with two production methods: “Luthier Made” which is built by one master luthier from beginning to end, and “Hand Made” which is built by a small group of experienced craftsmen, specializing in specific areas of the guitar making process.

When we first introduced the S Series in 2001, we offered 8 selected models, which combined 2 body styles (Grand Auditorium and Classical Auditorium), 2 Cutaway designs (Venetian and Florentine), 2 top materials (Spruce and American Cedar) and 2 sides & back materials (Rosewood and Mahogany). In 2003 we introduced the “Round Back” and also improved the bracings. We were then able to offer 12 improved models in the catalog. In addition we added a smaller body SS Model and a semi-jumbo body SJ Model, now totalling16 different models in S Series.

When the strings are tuned down, the string tension becomes lower, which often causes problems such as string buzz and dead spots. It is necessary to have a strong and straight neck in order to adjust to the changing string tension when the guitar is tuned down. In order to express the subtle difference of the delicate fingerpicking sound, the body must have a good response. This enables the player to transfer all the vibration of the strings, have a balanced sound from the treble to bass, and be able to amplify the sound.

The neck of the S series is made of mahogany that has been dried for about 5 years, with a width of 44 to 45 mm (usually 42 to 43 mm) at the nut position and a scale length of 652 mm. The thickness of the neck is 21 mm at the 1st fret position and 22 mm at the 10th fret position, making it a straight type ultra-thin neck with little change in thickness.

A bidirectional truss rod in an aluminum case is embedded in the part most affected area by tension in a way that integrates with the neck. This enhances strength of the neck and ability to restore the arch of the neck.

In order to offer ease at playing when pressing the 6th string with your thumb, the space between the 6th and 1st strings is kept as it is while whole strings are set about 1mm closer to the bass side, preventing the 1st string from falling off the frets.

The neck and body are jointed by an efficiently shaped dove tail to improve sound transmission and prevent neck movement at the joints. The neck is mounted at angle against the body top, making it possible to keep the string height in the high position low.

The body is made of fully naturally dried material, and all the adhesive parts are firmly adhered with the latest adhesive comparable to glue.

The Grand Auditorium, Classical Auditorium, and Semi Jumbo all have smaller body sizes yet their thicker body helps to generate a louder sound. As for the back, there are two kinds of shape called "flat back" with a slight round applied in the direction of strings, and a parabolic antenna-shaped "round back" with a round applied in the area of neck joint and body end as well. There is no big difference in the fundamental of sound and sustain between the two, but the "round back" emphasizes the overtones with a powerful sound of enhanced bass and volume.

There are several types of top bracing we offer such as scalloped X bracing, scalloped XX bracing, fan bracing for models with classical guitar design, and lattice bracing for the latest Luthier-made models. In both X-bracing and XX-bracing, the string vibration is transmitted from the bridge to the entire top in a well-balanced manner, achieving rich resonance and sustain from bass to treble. The X bracing is also applied to each back and similarly it produces a richer sound.

Due to the large neck joint angle, the saddle is 1.5mm higher and the bridge pins are aligning parallel to the saddle. Thus the action on the bridge side is adjusted and proper tension is secured.

From the low position to the high position, the distance from the fingerboard to the strings is very short, creating an environment where there is little deviation in the octave pitch, and adjusting with the saddle ensures accurate pitch even in the high position.

We apply a small amount of paint evenly and thinly, and then polish it. We repeat this process four times to obtain thin and durable coating film. 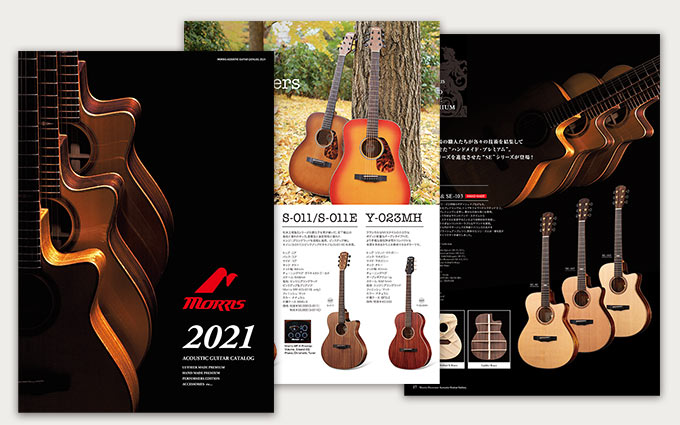 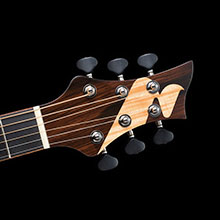 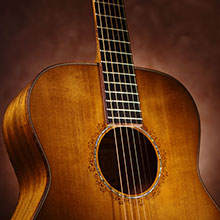 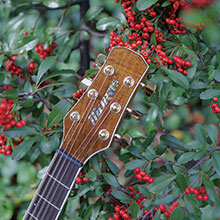